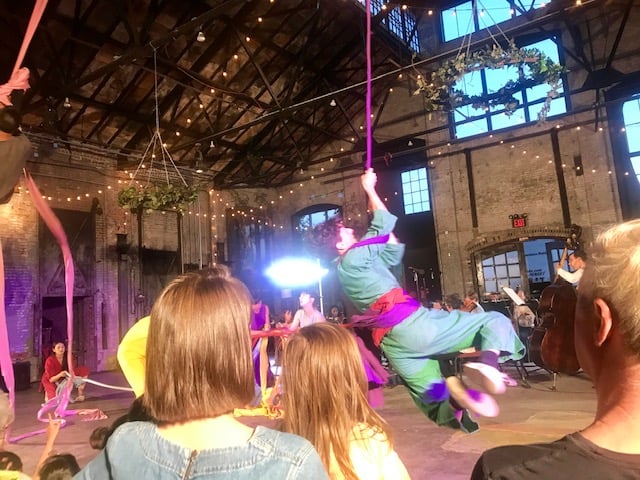 Adam Weinert’s project began in September of 2018, with Augmented Reality Technology Workshops in collaboration with community partner Hudson Area Library. Three after school two-hour workshops taught 18 students dance movement and introduced technology in the form of a mobile app created specifically for this project. The app allows the public to view archival footage as well as documentation of the performances simply by opening the app on their mobile devices and pointing the device at specific locations on site. The Digital Dance tweens and teens worked with Adam on exploring movement and creating choreography and they created site specific video of their performances.
The Hudson Library partnership was very receptive and appreciative of the project. Augmented Reality experience culminated in a two-hour community gathering. Library staff created a display for patrons that explained how to upload the app and go to the various locations. People did upload the app to their phones and were very interested in the process and in viewing the videos. The community stayed longer than the event was running and were really engaged not only in the dance performance of the kids led by Adam, but also in visiting the sites at which the augmented reality movement was created. 37 people were in attendance.

Hudson Hall served as partner and host to three movement workshops following the activities at the Hudson Area Library. Three additional workshops connected community participants to more of Adam’s work. The performance of Rip The Nut during the December 1st Winter Walk served as a companion piece to Adam’s infusion into the Hudson community. Youth from Perfect 10, an organization empowering girls, were among the performance seen by over 600 patrons on this festive event presented by Hudson Hall.

There was a delay in the project development residency due to lack of appropriate rehearsal space in Hudson, especially during the winter months. Space was acquired at Sternfeld’s Dance Studio and Adam began the creative residency in April.
Each morning Adam began with company class featuring a mix of exercises created by Ted Shawn, William Forsythe and Ohad Naharin. Following warm-up, we worked through choreographic material developed specifically for this project.

In the afternoons Adam invited local artist, educator and weaver, Margot Becker, to join our creative process. She brings a perspective on weaving to the process – from a community gathering lens, a makers lens and a visual design sensibility. Our goal is to create something that invokes American folk traditions such as the maypole dance, a barn-raising and other community celebrations.

With DanceForce support providing a base of support, Adam is now continuing to rehearse through May with other funding support as he gets nearer to the performance dates at EMPAC (May 31) and Basilica Hudson (June 9). With an anticipation of 300 audience participants, Weinert’s development residency has served as a catalyst for future experiences in the Hudson community and Hudson Valley Region.

Without a doubt in my mind, the performance at Basilica was the best one I have ever seen. I love orchestra music, so to see the Albany Symphony was an absolute treat. I was blown away by the quality of music. Specifically, Beethoven’s 5th symphony. It was performed with such a degree of professionalism. The dance performance was by the best part though. Mr. Weinert did such a fantastic job with the choreography. I was amazed with all the popping colors and vivid movements. I enjoyed seeing the aerial portion as well. To see the dancers climb was so wonderful. The sing-a-long was fun too. My personal favorite was “This Land is your Land.” I was very satisfied with my night at the Basilica.

NYS DanceForce3 weeks ago
Now's the time to join Dance/USA:
"Dance/USA, is excited to announce that the organization will cover the cost of dues for current members from July through December 2020. In addition, Dance/USA invites NEW MEMBERS to join for only $25, regardless of membership type."

NYS DanceForce1 month ago
Yes! NYS DanceForce has been awarded funds to pay out partial payments to all artists who have lost work because a DanceForce project has been cancelled or indefinitely postponed. THANK YOU, NEA!

NYS DanceForce2 months ago
For dancers, the communal rites of practice and performance have become startlingly raw solo forms.

Choreography Under Lockdown
For dancers, the communal rites of practice and performance have become startlingly raw solo forms.
newyorker.com
1    View on Facebook

APAP|NYC 2021 Participation Survey
Take this survey powered by surveymonkey.com. Create your own surveys for free.
surveymonkey.com
1 1    View on Facebook