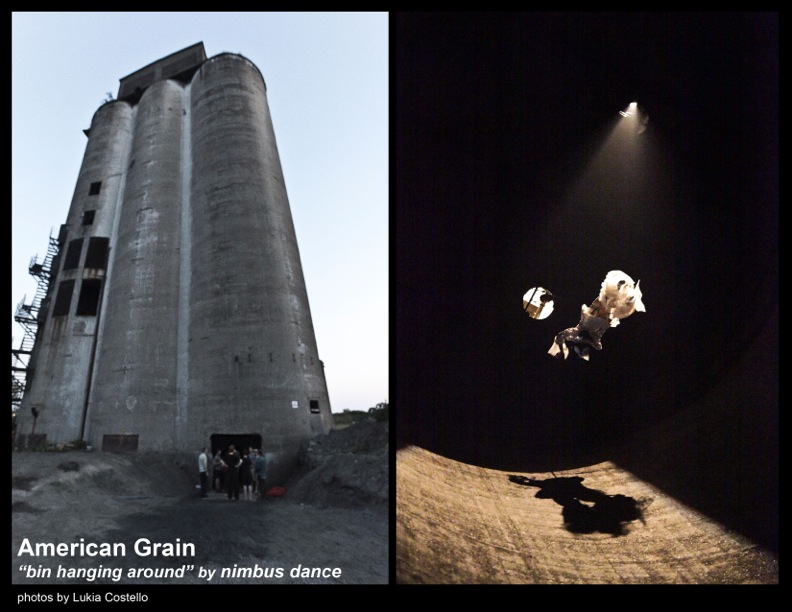 The long range goal of this project was to marry Buffalo’s outstanding creativity in the world of contemporary art with its unique and iconic historical architecture. The short term goal was to create a collaborative, multidisciplinary arts program that brought together Buffalo’s best artists from five different organizations for a one day performance to held in Marine A—the powerful, bone-white early 20th century grain elevators in the heart of Silo City. In Early April, Mark Goldman, lead co-producer, and I met with a group of select artists in Marine A several times to begin to brainstorm ideas that would illuminate the reliquary space that is the silos. Using each of the seven silos as individual performance sites, united by a loose narrative and compelling images of Buffalo’s glory days, the artists began to imagine how his/her particular discipline (i.e. dance, music, theatre, & video) could be shaped around the powerful and haunting space in which it would take place. Production meetings were then held weekly, sometimes in the backroom of the Hardware Cafe and sometimes in Marine A, to discuss the artistic design of this piece as well as the practical fiscal needs. On April 13th, Mark and I attended an informational meeting conducted by Arts Services Initiative (ASI) explaining the recently released RFP for cultural events on the waterfront. On April 24th, we submitted our proposal and on April 29th we (along with the artistic team) were interviewed by the ASI review panel. Soon after we received word that our $10,000 request had been approved for $7,500—one of only a few funded at this level. Not wanting to compromise the integrity of our original vision, we set out to raise additional funding from local foundations, corporations, and individuals. After the huge success of our event, ASI then re-granted us another $2,500 raising our total support to the originally requested $10,000. In total, we managed to match that amount 3 to 1, including in-kind services. This was an astounding gesture of confidence during a time of economic instability in our city.
Once our project was solidly underway, much time was also spent focusing on the complicated logistics and equipment required for a high-tech, multidisciplinary event in a cavernous, collection of empty grain elevators! Fortunately, countless individuals and institutions (i.e. UB, BSC, Torn Space Theatre, The Road Less Traveled, & Nimbus Dance) contributed personal time and the free use of extensive equipment; this collaborative spirit was what made this complex performance materialize.

All of the artists were Buffalo-based: Jonathan Golove and Matt Sargent, two heralded composers & performers from UB; Dan Shanahan’s Torn Space Theatre, recognized as the most avant garde of our local theatre companies; Brian Millbrand of BSC Communications Dept. whose work as a multi-media artist rivals the Vasulkas; Nimbus Dance with Beth Elkins and Bradley Wales, a company known for its experimental site-specific work; and, Carli & John Rickus, highly regarded lighting designers from The Road Less Traveled. This event brought these artists together for the first time as a complete artistic team, an incredibly creative and effective partnership. As can be imagined, the production meetings were teeming with ideas and excitement about this unique performance opportunity! On August 25th, 400 people—all ages, all ethnicities–moved through the 110′ high silos, experiencing a powerful and haunting space that suddenly became the stage for: dramatic shapes and lines defined by carefully directed light and shadow; abstract movement that penetrated space both on the ground and in the air; haunting theatrical moments where monologues as well as prolonged silences suggested the complexity of the human experience; and, where emotion-charged, haunting music lingered long after the instruments were silenced. The impact of this performance on the audience was revealed both by the quiet intensity of their attention and by the spontaneity of their applause and voiced surprise. The 200 people were not able to enter the silos, sat in chairs outside the silos and watched a 40′ high video projection of what was happening inside the silos. In addition, several original videos created by local video artists were also presented at this unique outdoor venue.

We also received very good coverage from The Buffalo News and ArtVoice, both pre & post reviews. Our marketing efforts were enhanced by Torn Space’s website and the contemporary designs of our postcards and posters.

Jim Self7 days ago
Many thanks to Curt Steinzor, New York State DanceForce, and the National Endowment for the Arts CARES Award for disrupted projects due to Covid-19-- Very much appreciated!
2    View on Facebook

NYS DanceForce7 days ago
Many thanks to Curt Steinzor, New York State DanceForce, and the National Endowment for the Arts CARES Award for disrupted projects due to Covid-19-- Very much appreciated!
3    View on Facebook

Missy Pfohl Smith1 week ago
Join us for our first-ever virtual show with two worldwide premieres that you can watch from your own home, anywhere, any time, starting Sept. 15 through Oct. 10! $5 tickets available now through Sept. 26. #rocfringe20 #performingduringcovid
View on Facebook

Molissa Fenley2 weeks ago
Thank you very much to DanceForce for the lovely award to help cover expenses incurred by cancelled work during the pandemic. Very appreciated!!
Molissa
1    View on Facebook