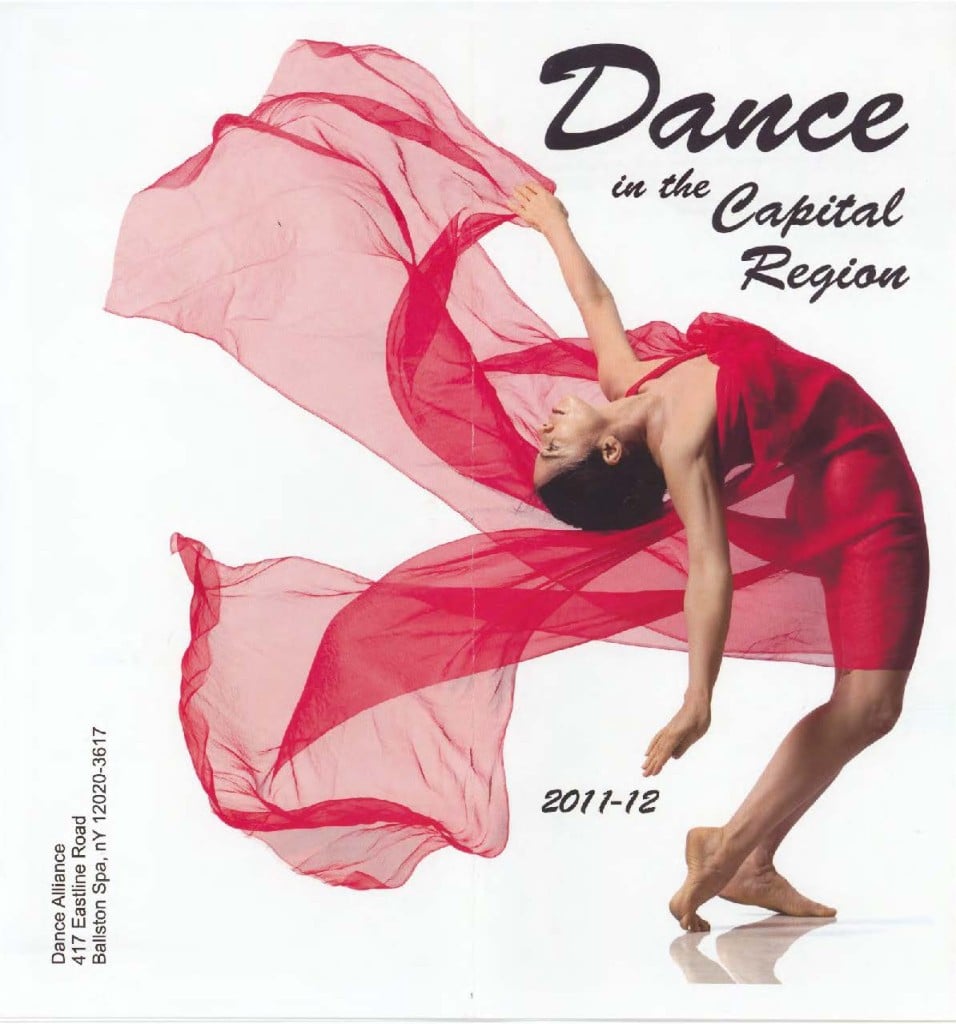 The Capital Region is composed of four cities and a minimum of 10 dance presenters. Each venue operates its dance offerings independently. Regional dance audiences, dance educators, dance artists, students of dance have access to dance season offerings via a single document in the Capital Region Dance Calendar. As a full color designed duo fold presentation, the calendar is attractive and holds a 12 month value for potential dance audiences. It provides the dance season offerings as well as contact information for all participating presenters and dance companies. The collection of data for the dance calendar provides an opportunity for regional dance presenters to work together toward a single goal. For the local companies, the calendar deadline creates a mandate that they solidify their seasons in a timely manner with the reward of mention in the dance season calendar. New dance presenters arise each year. Universal Preservation Hall and others are beginning to present dance. The calendar is a marketing piece for the region and the DanceForce, allowing new audiences to be reached at each of the venues for the enjoyment of dance. 2,500 calendars were distributed to targeted mailing lists – first class mailing, tables in cultural venues and gathering places. Educators and dance professors that bring their students to dance use the calendar to plan their curriculum, arrange for bus transportation and secure funding to supplement ticket fees for their students to attend performances.

2011-12 was officially a no-funding year for Partners in Dance, however, Dance Force member Toni Smith graciously donated $3500 of her Dance Force funding to PID to support our regrant program. Partners in Dance contributed $500 in funding from our own resources for a total of $4,000 of available funding. Each year, Partners in Dance regrants our Dance Force funds to our members to support programs in youth and adult education with the goal of educating and building audiences for dance in the Capital Region. Members were notified of the competitive grant availability through email and print materials. Typically our review process occurs in the fall, but the 2011-12 application process took place in January 2012, with a panel of PID members evaluating and awarding grants, and the PID Board voting on final approval. Board member Lauren Zoppa administered the grant program on behalf of PID.

For 2011-12 we funded three projects (descriptions below) in Saratoga, Schenectady and Rensselaer counties. 19 artists and 5 community partners were involved in the 74 events and activities, which reached nearly 2,000 people of all ages. Activities included workshops and performances in modern dance, swing dance, salsa, and hip-hop, and included both in-school AIE activities as well as events open to the public. Tango Fusion’s program specifically reached out to a small local underserved population, while the Arts Center’s project targeted the general public, reaching over 1,000 people. Grant recipients are responsible for their own publicity & promotion (typically using a combination of print and electronic media), but PID posts funded events on our webpage and Facebook page. Community and participant response was enthusiastic for all programs. Here are the 3 programs we funded:

The Arts Center of the Capital Region: $1500 for Dance in Unexpected Places/Spring Expression. The Arts Center collaborated with Ellen Sinopoli Dance Company on a new multi-part modern dance performance at the Arts Center in Troy entitled Dance in Unexpected Places/Spring Expression. The dance experience consisted of 3 free performances (Dance in Unexpected Places), performed to ambient sound throughout The Arts Center lobby and exhibition galleries on January 27, February 24, and April 27 as part of Troy Night Out, and a repertory concert that featured a new premiere, Spring Expression, performed on May 12 in The Arts Center’s 100-seat Black Box Theatre. Before the concert and after each performance, audience members had an opportunity to talk with Artistic Director Ellen Sinopoli and the ESDC dancers about their experiences in choreographing and performing the pieces. Because of the informal nature of the project, and the timing of it with the popular Troy Night Out program, many people were exposed to modern dance who might not otherwise have come to a concert. Dancers moved through and interacted with multiple spaces in the Arts Center as visitors and sidewalk bystanders observed. Many followed the dancers from space to space, commenting on this unique means of presenting dance. Many spoke with Ellen and the dancers in between sets. Over 1,000 people of all ages attended, and nearly 50 followed up by attending the Spring Expression premiere repertory concert. The Arts Center reports higher than average attendance for these troy Night Out evenings, as well as new faces in the crowds. Both the dance company and the Arts Center were very pleased with the outcome.

Ellen Sinopoli Dance Company : $1500 for 4th Graders Experiencing Dance as Audience Members, Choreographers and Performers. Ellen Sinopoli Dance Company conducted a dance residency program for 4th graders in the Scotia-Glenville school district. The residency began with a February 14 performance of ESDC’s “Dance By Chance,” a lively, interactive show which mixes math and movement. Prior to the performance, teachers prepared the students with activities and a study guide from ESDC. Following the performance, 5-day residencies with all 4th grade students were held in each of the schools from March thru May. Working with 2 dancers and a percussionist, students developed a basic vocabulary of modern dance, explored spatial concepts, and dove into the creative process, inventing innovative and imaginative ways to move and create shapes. Students choreographed their own small group pieces, and performed them for an audience of other students, teachers, and family members. This program is in its 13th year, and is highly prized by the district, which commits significant personnel and resources each year to ensure its success. Teachers are impressed with the engagement of their students as they develop new skills and ways of thinking. During the residency students kept written and illustrated journals of their experiences, and judging by their comments, they love it and learn from it. Each year, it reaches a new group of students, parents and families, making it a very effective audience building tool.

Tango Fusion Dance Company: $1000 for Dancing Families. Tango Fusion Dance Company partnered with the South Side Rec Center to bring a series of dance classes to families in the Jefferson Terrace neighborhood of Saratoga Springs, a racially diverse and economically challenged underserved population. Fun and informal, two 4-week sessions of classes in Swing and Salsa dancing were offered from March-May for kids and adults of all ages and abilities. Classes for kids were free, and culminated in a Kids Night Out celebration at the South Side Rec Center where the kids shared what they’ve learned, and Johnny Martinez and Diane Lathrupp performed. The adult class was to have culminated in a night out with the instructors at a local dance club. Tango Fusion developed this program as a direct result of a successful pilot project they initiated at Jefferson Terrace last year which received good community response. This year, they had some difficulty with one of their community partners not fulfilling their (publicity and space) responsibilities which affected attendance and resulted in a change of plan and venue. Despite Tango Fusion going door-to-door with information, adult participation was low due to the last minute notice. Classes were moved to Tango Fusion’s studio (a few blocks away) instead of on-site in the neighborhood, and they partnered with a local school to attract more students. Hip hop was added as the kids expressed interest in that. Ultimately however, the project successfully reached an underserved student population, and the kids expressed a desire for more.

NYS DanceForce3 days ago
A new project will be coming to the 171 Cedar Arts Center in Corning. The project was created by Naila Ansari who is an Assistant Professor in Theatre and Africana Studies at SUNY Buffalo State Col...

171 Cedar Arts in Corning holds virtual event, expressing joy through dance
A new project will be coming to the 171 Cedar Arts Center in Corning. The project was created by Naila Ansari who is an Assistant Professor in Theatre and Africana Studies at SUNY Buffalo State Col...
weny.com
View on Facebook

NYS DanceForce3 weeks ago
One-time grants of up to $5,000 for recent unexpected medical, dental, and mental health emergencies experienced by artists in the past six months. The Cycle 7 application is now open and will close on Monday, May 3 for emergencies occurring September 1, 2020 or later.
emergencyfunds@nyfa.org
View on Facebook

NYS DanceForce1 month ago
A Choreographer Who Bridges the Worlds of Dance and Nursing
Devynn Emory online at Danspace Project starting 3/31
https://nyti.ms/31jM762

A Choreographer Who Bridges the Worlds of Dance and Nursing
Devynn Emory’s “deadbird” — a duet for Emory and a mannequin — deals with grief, envisioning “an ideal care team for a body who’s passing.”
nytimes.com
1 1    View on Facebook

NYS DanceForce2 months ago
Opportunity for artists born outside the USA

Missy Pfohl Smith2 months ago
The University of Rochester Institute for the Performing Arts invites YOU to apply, and to share widely with artists, educators and activists from all over the globe. Visit https://www.sas.rochester.edu/PerformingArts/artschangeconf.html for more info and to apply by March 26, 2021.
#ARTspluschange